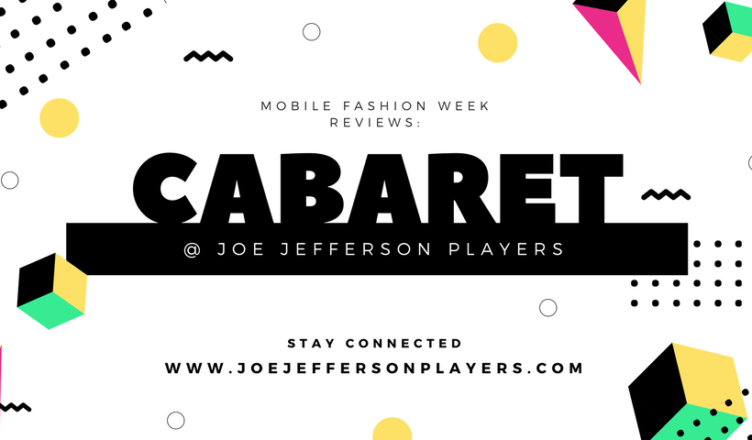 Lewd jesters and provocative choreography were in full strut at the Joe Jefferson Players’ production of “Cabaret”.

Based on the original 1966 production, this musical was directed by Eric Brown, who was quoted as saying “the music is delightful and the message is more important than ever”.

Opening with the tottering theme of “Willkommen,” the Emcee, played by JJP new-comer Nick Smith, dished and teased the audience with an introduction to the Kit Kat Klub while Kit Kat Girls strut all their goods. In his rounded German accent, Smith dazzled the crowd with audience interactions, brilliant choreography, quick on the spot jokes, but above all else, his acrobatic singing range.

In the world of 1931 Berlin, at the height of post-World War, I liberality and artistic freedom in Europe and before Nazi rule consume Germany. Come center stage Clifford Bradshaw (Matt Kridel), the struggling writer who is welcomed with open arms by the Kit Kat Klub’s prima donna, Sally Bowles (Mollie Betsch). All is perfect until the reality of post-party settles in.

The musical stylings of a six-piece band in tuxedos (Musical Director, Lee Arron Klosterman) never got old. The music was beautifully performed and executed with precision, from the ballad of second act favorite “What Would You Do?” to the rockin’ first act “The Money Song.” The vocal talent of this show was completely overwhelming, especially with that of Smith’s and Betsch’s, this performance completely morphed JJP from a medium-sized community theatre on 11 South Carlen Street to the feeling of a bigger, brasher venue that would trump any Broadway theatre. Betsch’s’ solos were infused with a vulnerable power that allowed her movements and that natural spark to engulf her character.

The Kit Kat Girls — Rosie (Sarah J. David), LuLu (Candace Foster), Frenchie (Shanarrous Briggins-Pollard), Texas (Catherine Moore) Fritzie (Mallie K. Lyons) and Helga (Rebekah Howard)— with their crawls, kicks, and multiple rotations, which all seemed choreographed (by Rebekah Howard) to have a legitimacy that only this show could have. Additionally, Evelyn Watkins, as Fraulein Schneider, took on the perfect character of the bored just getting by landlady like the professional that she is.

Yet, above all of the genuine talent on display, there was Smith. From his puckered rouged lips to his comedic gifts all were well-pronounced. The list clearly could go on, but what truly made Smiths’ performance exceptionally was his balance with Music Director, Klosterman’s’ rhythmic patterns. It goes without saying that Brown did some of his finest work directing “Cabaret” at JJP, encouraging the artistic liberty that allowed this show to grow wings and fly.

So “ladies, gentlemen, and those who have yet to decided” I beg you to get your tickets and take in some “Cabaret.”