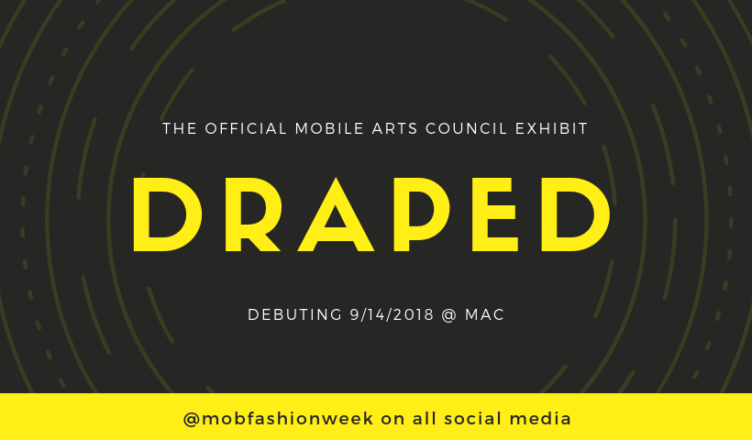 Our 2018 Mobile Fashion Week Exhibit at Mobile Arts Council is diving into the art of draping! From Ancient Egyptians to Modern/Contemporary designers draping has been one trend that has survived through the ages.

The art of draping can be dated back to 3500 BCE, beginning with the Mesopotamians and Ancient Egyptians. Greek fashion followed with the invention of draped silhouettes like the chiton, peplos, chlamys, and himation. The Etruscans and Ancient Romans invented the toga, a length of fabric that wraps and drapes around the body.

Throughout the years, clothing was categorized by either “fitted” or “draped.” A “fitted” garment would be sewn together and worn close to the body creating a fitted silhouette, in contrast to a “draped” garment, such as a Roman toga that doesn’t require sewing would be wrapped loosely. In today’s fashion culture, both fitted and draped garments can be patterned using the draping process, to achieve the perfect runway look or a casual evening dress.

Draping has been the staple of many famous designers beginning with Madame Grès, known as the “Queen of the Drape”. Her expertly draped and executed collection of Grecian-inspired silk jersey dresses could yield over 70 yards of silk jersey each. Madame Grès and American designer Pauline Trigère were both known for draping their designs directly on live models instead of dress forms.

Present day draping has been made mainstream from multiple designers which new techniques in design being discovered every day in the digital and automated world, when all is said and done, designers continue to love the art of draping because their designs come to life as they manipulate the fabric to create a final piece. Even though a designer may begin their design out with a design sketch, during the draping process a new and more interesting design usually takes shape. This is why draping is considered the more creative method of pattern making.

See what creatives take place this year at Mobile Fashion Week 2018 on September 22, 2018, at The Fort of Colonial Mobile!